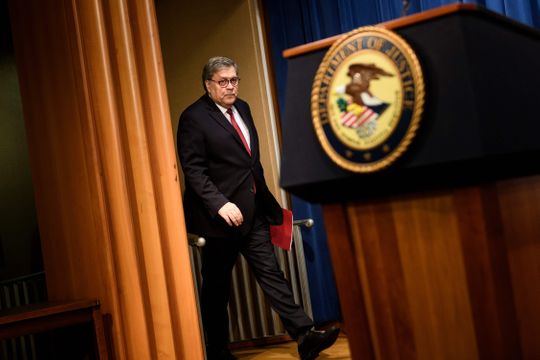 WASHINGTON —  As per the recent report on the ongoing tension between the Trump administration and House leaders, Attorney General William Barr’s statement has given a new turn to the story. William Barr strictly warns he will not appear at hearing on the Justice Department’s handling of the Russia investigation if the staff lawyers question him. The next day for hearing is coming Thursday.

As per the report, Barr will make two appearances before Congress this week. He will answer questions regarding the special counsel investigation. His first appearance will be before Senate Judiciary Committee on Wednesday. The Republican is controlling the committee.

Jerry Nadler, Chairman of House Judiciary Committee, has stated that Barr could be questioned Thursday by the committee counsels along with the lawmakers. Nadler further stated that Barr would appear in a separate and closed-door meeting the investigating panel.

Earlier in April, Mueller’s report was made public. It has that the president tried to limit or divert Mueller’s investigation. Following this, Democrats have urged to question Barr about his opinion in the case.

When Mueller refused to tell about whether Trump’s manner was criminal or not, Barr intervened in the matter. Some report argued that Trump or his campaign had plotted with the Russian government to deviate the 2016 election. However, the special counsel who was investigating the matter didn’t find any solid evidence on that.

A senior Justice officially on Sunday stated that Barr had initially agreed to appear before the committee. But now the officials informed if the committee leaders demand that the panel’s staffers question Barr, Barr will not attend.

Recently, House Judiciary Republicans termed this abusive, and the Democrat’s demand is baseless in a statement. The GOP officials stated the attorney general Barr is not a fact witness.

Talking more about this case, apart from the Judiciary Committee, now House Democrats are also demanding information from Trump administration officials under the current investigation on Trump’s manner before as well as after he became president. However, Trump stated the case as baseless, and the administration would challenge orders.