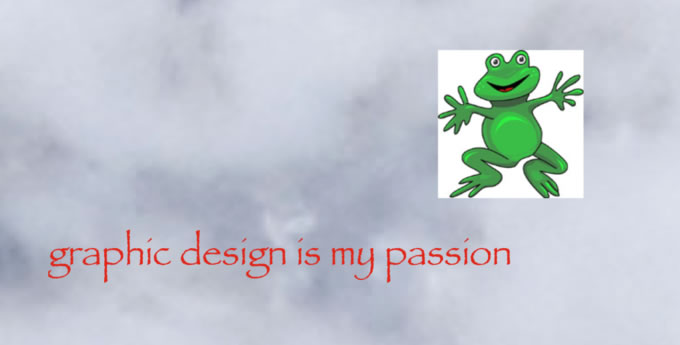 Since this meme is so popular, and almost everyone who knows or has seen this meme wants to know about it, we have written this article to cover all the essential elements.

Graphic Design is My Passion Meme – What is it?

After seeing this meme, the first question that may have popped up in your mind is, what is this meme about? It’s basically a sarcastic meme for designers. Yes, you heard it right, a meme about designers!

Designers are always passionate about their work, and they often like to flaunt their work on different social media platforms, for example, Facebook, Tumblr, Instagram, and more. This meme basically mocks designers, be it of any kind.

Someone posted the meme on Tumblr on 7th July 2017. If you think about this year, you will realize that 2017 was definitely not an easy year for memes to become famous. However, graphic design is my passion meme surpassed the notion and received over 300.000 notes!

Many variations emerged soon after the release of graphic design is my passion meme. And we can clearly understand why.

The image that you can see below is the original graphic design is my passion meme.

Graphic Design is My Passion Meme- The Reason for Its Success

Like we already shared, this meme garnered a lot of attention mainly because it was sarcastic and funny. People could relate to this meme and understand the hidden meaning behind it. This meme is still popular, and even UX designers use it. They use to reflect on the work that they do. Some use this meme to mock other designers.

We want to share one interesting thing with you: Tumblr even did a blog on graphic design as my passion meme. Looking at the growing popularity, Tumblr thought of highlighting it and write a topic on it. And as you can guess, the blog was a massive hit!

The Person Behind it!

Yungterra, a Tumblr user, posted this meme on his Tumblr profile. However, no one is sure whether Yungterra is the person behind creating the meme. A lot of people give credit to two Tumblr users- Pentabulge and Kykiske.

There are still rumors that Yungterra made the meme famous, but others think that Pentabulge and Kykiske are the people behind it. We let you be the decider. You can visit their Tumblr pages to find the answer. However, to see the content of Kykiske, you will need a password.

How to Create Your Own Graphic Design is My Passion Meme?

Now that you know about the popularity, you may wonder if you can create your own version. The answer is yes! That is to say, creating graphic design is my passion meme isn’t tricky. The version will be yours, which means you can add your personal touch to it, keeping the essence of the original meme. Most importantly, memes give you the freedom to exaggerate as well.

If you look at the actual meme, you will notice the font to be Papyrus typeface. However, you are free to use other fonts. There is a hazy and cloudy background with a green frog towards the side. In fact, nothing much has been done in terms of creativity. This will also tell you that the reason for creating this meme is solely to mock designers. The frog that you see in the meme is a classroom clipart frog. Just a simple design and font, and look at the popularity!

So, how to go about designing your own Graphic design is my passion meme? Follow the instructions:

Which Template to Use?

Some websites sell graphic design is my passion meme template. You can use Google search and look for templates or create your own. Don’t fuss about it too much. Let your creation take its own rate. Trust your instinct and choose a template that will look funny.

Most of the sites that have this meme’s template will offer multiple choices. This is actually an easy way to go about it. Most of the templates will have a cloudy background with or without a rainbow. You can get the template, upload it to Photoshop, and edit it to add personal touches.

What Font to Use?

The best way to go about the font is to use something that is not popular. The actual font of this meme is Papyrus typeface. You can use the same one too to add the real essence of it. Else, let your imagination run wild, and pick a font that you don’t see easily. The more distinct your graphic design is, my passion meme will be, the popular it will become. 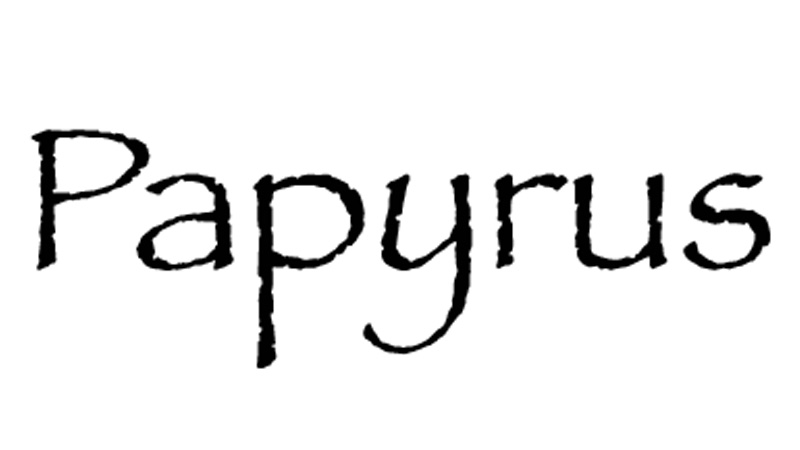 Some of the standard fonts that we see people using are Time New Roman, Calibri, Arial, and Comic Sans. These are the most popular. But we recommend using other fonts. And go the unusual route, which will let your meme shine out. To sum up, try to be a bit different than the rest.

Which Frog to Use?

Here comes the next question, and instead of the most important one. In the meme, you will see a frog. That frog is a classroom clipart frog. This is the main highlight of the entire meme. However, this frog is no longer available, so that’s sad news. But the good news is you have a chance to highlight your potential. Meanwhile, this clipart is available in many places. You can just search for it and copy-paste the image to your image editing tool. 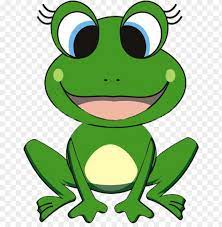 Here’s a little advice. The frog you will pick doesn’t have to be the same as this meme. In fact, there are so many other memes similar to this one, but with different backgrounds, images, and frog images. So, it’s entirely on you!

If you want to create an inspiring graphic design is my passion meme all by yourself, which will be close to the original one, here’s our step-by-step guide.

Firstly,open Adobe Photoshop. Now, click on create a new document. Choose the size that you want. The best size is, however, 1920×1080 pixels. 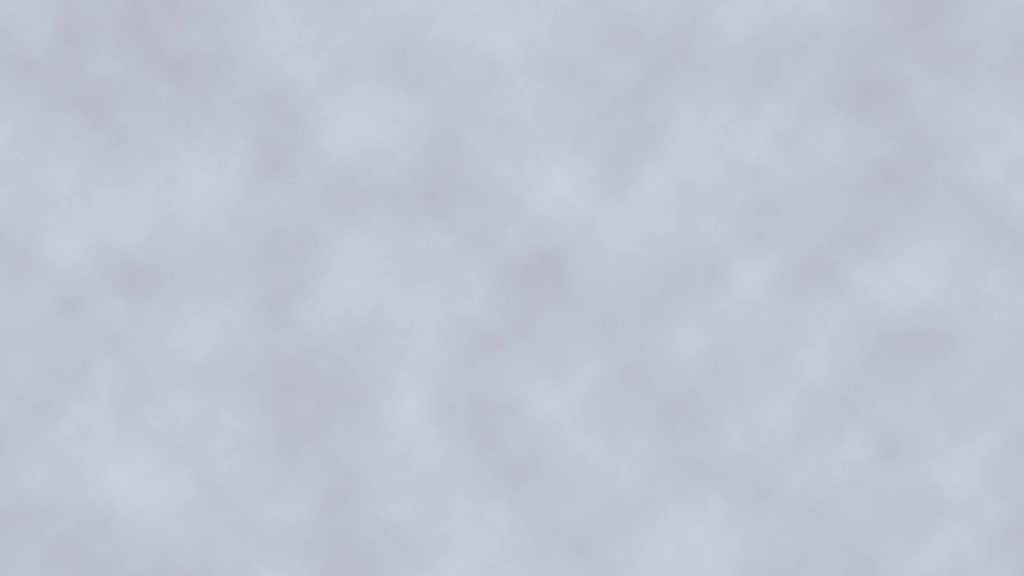 Secondly, pick a background and foreground color. It can be any color. If you want to go the original way, light grey and white will be the ideal choices.

Finally, random rendering of clouds option will be available. You can choose the filter that fits your requirement.

You may or may not add a rainbow background to the meme. It’s entirely up to you. There is a trendy graphic design is my passion meme where you will see a rainbow.

Thidly, in the gradient editor, you can choose the colors you want to add.

Finally, to save the changes, click on the OK option, and that’s about it.

From here, you can simply add the text you want to and how you want to. And simultaneously, add the image that you have.

The Top Examples of Graphic Design is My Passion Meme

As you already know, this meme is quite popular. And even today, some people design this meme, adding their personal touch. Because it is so popular, it becomes pretty apparent that there will be many like this. The cloudy background with the hilarious frog in the side makes this meme funnier. So, let’s figure out the types of other variations. Who knows, you may like one of them!

One meme that we like the most is this cute and equally funny graphic design is my passion meme. Take a look at the colors. It takes the original meme to an all-new level. As you can see, a rainbow background replaces the cloudy background. The cat replaces the frog, and the font is also different. It looks pretty appealing because of the rainbow effect.

No Image Graphic Design is My Passion Meme

Just like the image, you can also try this graphic design is my passion meme. There is nothing much to add to it. There are different fonts to this meme, a white background, and no image. Even then, it’s enough to make the statement. Instead of copying the same fonts, why not try other fonts?

If you look at the font-weight, you will notice that each font it’s different. Passion has a text shadow, and everything together makes this meme quite captivating!

Can you imagine putting Dr. Phil’s image instead of a frog in this popular meme? Well, someone has done it. Above all, just the picture of Dr. Phil makes this meme look comical! Rather than cloudy effects, there is an actual cloud image in the background. Finally, Dr. Phil’s face replaces the sun! Leave the quotation; the image will make you crack up instantly!

Rabbit Image and Graphic Design is My Passion Meme

Here’s another meme with clipart. In this meme, rabbit clipart replaces the frog clipart. But the funny part is, the background looks like straight out of a bad horror movie. And take a look at the font blood-red color! Can you imagine someone using this meme for their designing work? We don’t think so; therefore, it’s funny! 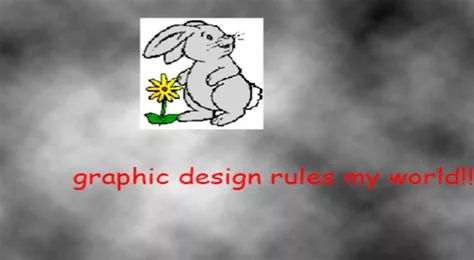 Graphic Design is My Passion Meme with a Twist

Among all the graphic design is my passion meme; we simply couldn’t resist bypassing this one. The dark cloudy background, blood-red font, and the old clipart image replaced by this adorable frog image. What a combo! 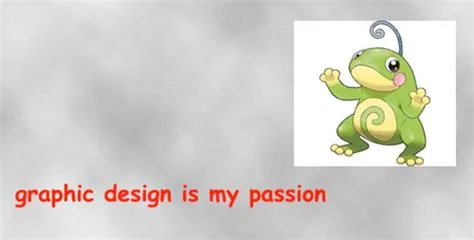 Since the main highlight of this meme is the frog, we were just thinking how anyone could leave Pepe the Frog behind? And lo behold, here comes the Burden Pepe Frog graphic design is my passion meme! We think the Pepe frog image just takes the original meme to another level with the cloudy background and red color font! In short, this has to be one of the best variations of the original meme! 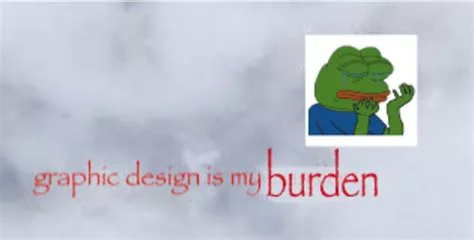 Graphic Design is My Passion Meme in a Gallery List View

How about a meme with multiple graphic designs is my passion written text, but passion missing the extra “s”? If you can catch the sarcasm here! The image has a weird-looking orange background, with the frog clipart and a donkey! Can you beat that? 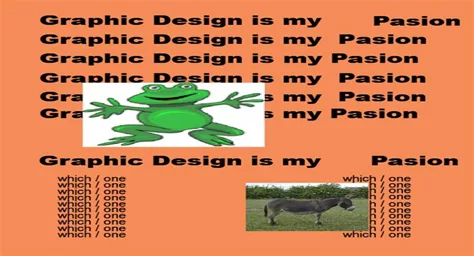 A Different Version of Graphic Design is My Passion Meme

Here’s another one that takes the show! Anomiris has created this hilarious version of the original meme. Look at the funny hand-drawn duck wearing a cut. And finally, the text says, “You are not the only one in the family with graphic art talents.” Isn’t this funny? That is to say, people have gone over the board to add their personal touch, which hinting at the same meme. In other words, we like it! 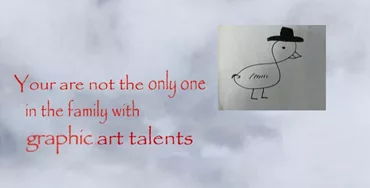 In conclusion, graphic design is my passion meme is still prevalent. Different people have tried their hands on this meme and have done a marvelous job in recreating it. The personal touch added to their versions makes the whole concept funnier. Just a tiny meme about graphic designers and such a significant impact on the crowd!

There is a whole history behind this popular meme. And we have to agree that this chuckle-worthy meme is one of a kind!