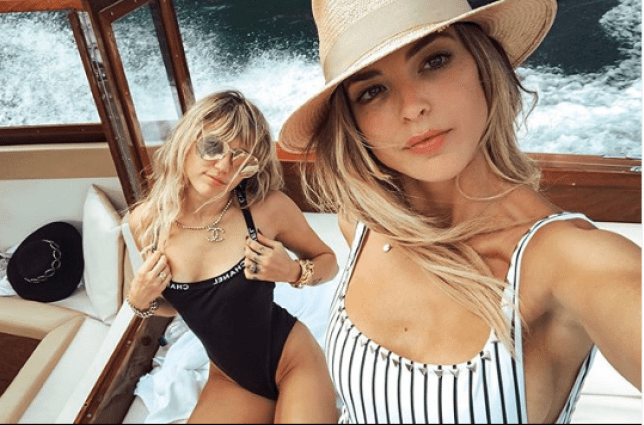 Contents hide
1 What do others say about Miley Cyrus Kaitlynn Carter kissing?

Kaitlynn Carter and Miley Cyrus were spotted kissing each other just before Miley informed about her separation from her husband Liam Hems worth. The images were taken a few days ago clearly show Miley was kissing Brody Jenner’s ex-wife Kaitlynn Carter. The due have spotted in Italy enjoying a boat trip. Miley Cyrus Kaitlynn Carter kissing pictures have proved that they were enjoying a great holiday together in Lake Como.

On the other side, Kaitlynn still has her wedding rings on even though she has separated from her husband this month. Well, the pictures have surprised their fans. It has also come to know that Miley may start dating Kaitlynn soon.

What do others say about Miley Cyrus Kaitlynn Carter kissing?

Just a few days back, Miley Cyrus and Liam Hemsworth mutually decided to split.  After a long ten years of romantic dating and eight months of married life, they quite it. After the separation, Hemsworth spotted enjoying a family trip with his brother Chris in Baryon Bay and on the other Miley was seen enjoying a good time in Italy, with Kaitlynn Carter.

The strange thing is that just a few weeks ago, Kaitlynn Carter and Jenner informed their divorce. Is not it very strange? Is there something between them? Well, let the time reveal the truth.

Shortly after Miley Cyrus Kaitlynn Carter kissing photos spread over the internet, Brody Jenner posted an Instagram image with a caption which says don’t let yesterday take up so much of today, aiming to the current situation.

Then Jenner’s friend, Brandon Lee, costar of The Hills: New Beginning commented something funny trying to joke about Miley Cyrus Kaitlynn Carter kissing. He also slammed it and sated this as a fake. He said the duo kissed just to get under the skin of their husbands.

Kaitlyn Carter after the separation

Talking about the split from the husband, Miley said that such a situation is inevitable. After that, Kaitlynn broke her silence and posted a video on her Instagram account. In that video, she was enjoying a helicopter ride while listing doesn’t worry be a happy song. It seems like a clear message about how she is enjoying her life.

After that, Kaitlynn posted an image on Instagram, which is also a clear message. So, what remains unclear now? It is about if Kaitlynn and Miley are a couple or just enjoying an outing together?

Well, the separation has come in like shocking event in Liam’s life as their marriage life didn’t last more than just eight months. He is now trying to learn how to move on and handle the condition. The first thing he did was spend some good time with his family members and went on a family trip with his brother. After all, there is nothing better than spending time with family during such a condition. It is quite impossible to believe that Liam and Miley are not together. They dated each other for around ten years, and now they are done.

Apart from the separation from Miley, another thing that has affected Lian the most is the pictures of Miley Cyrus Kaitlynn Carter kissing each other publicly. The kissing images surfaced just after the split news of Liam and Miley. This has made him quite uncomfortable. As per the source, the photos are little jarring for Liam, but he is kind of okay with it. The source further added that as they are not together, Miley can kiss anyone she loves or likes.

Well, he is still suffering from a pain which is quite understandable as the duo had an intense relationship for ten years. Miley has been in Liam’s life before the Hunger Games. They both had gone through many ups and downs but never imagine about such a thing. And now she is gone forever from his life. Liam doesn’t know what he will do. He is just trying to make himself comfortable with the situation.