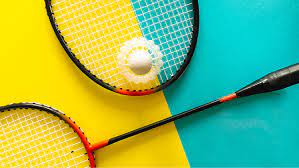 As we all know that badminton is a racquet sport as well as a great sport for fitness and the benefit of the sport is that it can be played by people of all ages. As badminton is one of the fastest racket sports. Players hit the shuttlecock towards their opponent. As a badminton player needs a lot of stamina and agility, certainly at competitive level badminton can be played by anyone and badminton is the most popular sport after cricket which is often played by the peoples and it also helps in keeping the body fit of the player.

Badminton is recognized as an indoor game in which the player hits the shuttlecock and moves and runs back and forth across the court and does not allow the shuttle to touch the ground. Badminton is played in two forms singles and doubles. In singles, there is a single-player on each side whereas in doubles there are two players on each side. The main objective of the player is to hit the shuttlecock to the floor on the opposite side of the net so the serving player scores a rally.

Badminton when began in India was recognized as “Poona”. In the 1860s the British officers stationed in India adopted the game and took it back to England where it became very popular. The history of badminton relates with the country like ancient Greece, China, and India and also relates to the old children’s games which were known as battledore and shuttlecock. Badminton in England is played from1873 and is named after the country estate of the dukes of Beaufort in Gloucestershire, England.

BWF [Badminton World Federation] is the world governing body of sports. It was formed in 1934. There are many such countries where badminton is a famous sport such countries are Malaysia, Japan, Indonesia, and Denmark. The world’s first BWF championship was held in 1977. BWF held many championship leagues and international tournaments which includes the Thomas cup for men and the Uber Cup for women. Each badminton tournament is look over by BWF.

Badminton court is a rectangle in shape which is colored with white or yellow lines which are 40mm wide. The posts are 159cm high from the court and are placed on the side boundary of the court. The badminton court is 13.4 m long and 6.1m wide. For singles, the court is marked 5.18m wide.

The net is made up of cord which is dark in color and the thickness of the is 152cm [5 feet] which is edged by a white tape doubled and supported by a chord or a cable which run through the tape and there are no gaps between the ends of the net and the posts.

There are different kinds of racquets available in the market according to the need of the players. Rackets are designed in such a way which consist of a handled frame with an open hoop across which the strings are stretched tightly. Traditionally the rackets were made up of wooden frames but now there are varieties of rackets made up of steel, carbon fiber composites, and aluminum frames due to which the wooden frame racket can hardly be seen in the market.

Basic requirements for the game

There are lots of tricks and deceptive shots which will help you in improving your gameplay as well outcome your abilities to face your opponent. You don’t need a perfect body to play this game all it requires is a perfect mind and the agility to play somehow the game itself improves your body structure if the player daily practice and work on his/her game. If you are looking into badminton at a career or competitive level then you need to focus on your health as well as your mental ability as badminton is a highly energetic sport.

Playing badminton is beneficial for the players as well as the beginners who just stepped into this sport as some of the benefits are as given below: